The voice that launched a thousand careers

Music journalist David Cavanagh talks about listening to 35 years' worth of John Peel shows in order to capture the essence of the legendary DJ in his book Goodnight and Good Riddance. 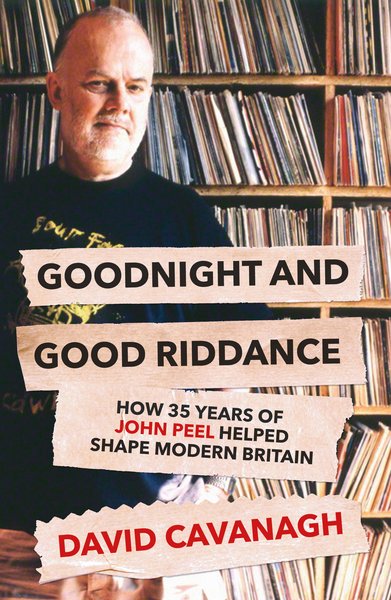 Stepping forward with the bold tagline "How 35 years of John Peel Helped Shape Modern Britain", David Cavanagh's book Goodnight and Good Riddance offers a fresh slant on the legacy of the veteran British broadcaster and champion of new and challenging music.

For the uninitiated, it’s a big call to suggest an irreverent, if impressively lengthy and adventurous, graze through the far reaches of new music could have such an effect. But for those of us who were listening, often furtively, to his late-night tones under the covers, with blatant disregard for the following day's scholastic pursuits, it’s pretty much fact.

Since Peel's death in Peru in 2004, there has been a great deal written about this unique personality who touched so many lives with such a profound musical effect. However, outside of the semi-autobiography Margrave of the Marshes, started by Peel and touchingly finished by widow Sheila, and Ken Garner’s The Peel Sessions, which covers the gobsmacking array of bands he invited to record bespoke material for his radio shows, little is truly worthwhile

The point of difference for Goodnight and Good Riddance is that Cavanagh focuses primarily on the broadcasting aspect, and how that manifested itself in Peel’s unique and devoted relationship with listeners.

“When people used to ask me what I was writing, because you never like to be too specific about what you’re doing, I would just say, ‘I’m doing a book about radio’, and I think that is still how I think about it," says Cavanagh. "I don’t think there will be too many more books about radio in the next 10 years or so, maybe I’m wrong.”

The softly spoken Irishman, whose CV includes stints at music mags Q, Uncut and Select, does have a point, although radio isn’t necessarily out for the count yet. Cavanagh’s story, like my own, and many other disaffected youths', is in finding that radio, and Peel’s show in particular, opened up a door to another world. Rather than the shared and controlled family TV set, the personalised choice of a transistor radio unlocked a whole other dimension. While most of the rest of BBC pop station Radio 1 was light frothy entertainment, often with music as an afterthought, Peel’s shows were all about the songs and sounds, and his desire for you to engage with them.

“I suppose he was the access to the 95 per cent of music that never got played anywhere else on Radio 1," says Cavanagh. "1977, when I started listening, was such an interesting year because you heard everything from punk to reggae to a lot of folk music, altogether and in these bizarre sequences. Krautrock, all kinds of things. No sort of explanation, or even acknowledgement, that this was an unusual way of programming music, but you got used to that. He really was a complete one-off. A lot of people on the internet and Twitter and so on will say, 'Oh well, so and so in some country is the honorary successor to John Peel.' I’m not sure there could be one, not just because of the way he put music together, but because of the person he was, and the way he spoke to people.”

The range of artists Peel introduced and championed who subsequently went on to do extraordinarily great things is astonishing, and only countered by the thousands of bands he played for whom having his attention and patronage may have been their greatest ever achievement, sometimes deservedly so.

Despite his unparalleled love for the pop-punk perfection of The Undertones' Teenage Kicks, Peel always maintained his favourite record was one he hadn’t heard yet – "there could be another Elvis in there" was his impossibly optimistic approach to a pile of unheard demos. His relentless adventurousness, and belief in the potency and democracy of music where Captain Beefheart or The Cravats  can achieve airwave parity with Wham! or Frankie Goes to Hollywood (both of whom, incidentally, also got their first national airplay via Peel), remained undiminished until he died.

Peel’s shows and his laconic delivery were a beacon for misfits and miscreants. The irritant role was one he enjoyed, and made little secret of when appearing at the cringe-inducing Radio 1 Roadshows or as a defiantly cornered presenter on BBC TV's Top of the Pops. As Cavanagh notes in Goodnight and Good Riddance, Peel was at his best when he was under the gun from the BBC’s conservative management, “when his show had no ally or friend, like some of the time in the mid-'90s when he’s like a hooligan with some of the music he's playing”.

And Cavanagh should know, after adopting a rigorous, borderline ridiculous, regime of Peel show listening in order to assemble his hefty tome that covers 300 broadcasts from 1967 to 2004.

“I listened to two shows a day, every day through 2013. By 2014 I was beginning to write. When I would listen, I would make notes on what he played, what he said, everything, not knowing what I would use, so in the end I over-researched.”

For many years, Peel’s show was prefaced each night by a news summary delivered in a suitably austere style by a BBC announcer, and then a warning of some of the delights to come, listed by Peel over Grinderswitch’s Pickin' the Blues. Cavanagh adopts a similar format, beginning with a news item from the day and a selection of the evening’s musical offerings, before moving on to discussion. It’s a canny device that helps develop the slightly spurious argument for his lofty tagline, and from any former listener’s perspective it simply adds to the full-immersion Peel experience of the book.

“His show was at the end of the day, so let's say you had been at school or university or whatever or doing some job – those two hours would end the day putting it all into some sort of Peelian context. The show wouldn’t always refer specifically to news events that had happened that day, although I do in the book. But in a funny way the music Peel chose seemed to indirectly refer to everything that was happening around Britain, around Europe I guess. And so you went to him as some sort of a wise figure who could sort of make sense of it all, and make it seem maybe less dangerous at times when it appeared to be very dangerous. The early '80s shows I’m thinking about, where there was the threat of nuclear war. We look back now and think there could never have been a nuclear war in the early '80s, but it didn’t seem like that at the time.”

For the not inconsiderable army of late-night Peel listeners, Goodnight and Good Riddance is likely to bring back vivid flashbacks, not just to Greenham Common Women’s Peace Camp and a time when assembling to protest about, well, almost anything was the norm, but also to the rituals that accompanied such dedicated nocturnal listening. I’m sure I’m not alone in recalling endless nights precariously balancing my transistor radio with minute adjustments to ensure the best reception. In later years, you could count on that reception infuriatingly dipping out just as you waited, eager finger on the pause button, trying to predict the precise end of Peel’s preamble in order to have repeat taped listens later to wonderfully monikered artists like I Jog & The Tracksuits, Misty in Roots or the latest session from Ivor Cutler.

As listeners at the time, in the pre-internet '70s and '80s, we all knew little of Peel outside his nightly transmissions. His often banal columns for music rag Sounds predominantly detracted from the mysterious radio legend, and without resources like the wonderful Perfumed Garden website or the John Peel Wiki, there was just two hours of music a night and some splendidly intelligent banter to go on. Now you can find playlists and/or recordings for most of his shows online, and more text and opinion on this genuinely shy and unostentatious gentleman than he would have ever imagined or probably desired.

What Cavanagh really captures best in his exhaustive publication is the sense of friendship and musical empowerment Peel managed to exude over the airwaves, and how that was reciprocated thousands of times over.

Indeed he did, as the conservatism of his annual listener-voted (or more accurately letter-writing listener-voted) Festive 50 unwaveringly revealed, much to his horror. His incessant curiosity about music was insatiable and completely sincere, and the Peel you got on the radio was exactly the same in person and conversation, or corresponding by meticulously written, highly amusing postcard, as was his delightfully nostalgic habit – something I got to experience myself when we kept in contact after his 2002 visit to New Zealand organised by the British Council.

Cavanagh’s genuine passion for his subject is palpable, and he’s a better writer than most, only resorting to the music journalist’s easy refuge of gratuitous snarkiness in the book’s later pages, where it feels like he may have begun to reach an unmanageable level of personal peak Peel.

While common sense would suggest Goodnight and Good Riddance is aimed straight at the hearts and wallets of Peel's massive devoted listenership, and it surely is, there is plenty here for those who never had the chance to tune in, especially if they’ve ever wondered what all the fuss is about.

Now, as the man himself would have said… back to the music.

Jim Pinckney is a broadcaster, DJ, music writer and head of the record label Round Trip Mars, whose artists include SJD. You can find more of his work at stinkyjim.com.